UPDATE: The bonnet lifters need the ram extensions removing (see TOP PRESS below). However this will complicate things as the ball fittings in the end of the lifters (that you still need) are M8 threads and not M6. This means you will have to obtain some more ball fittings. It is not the end of the world (just a bit of a pain). In the UK and Europe they can be obtained here
STOP PRESS! These kits do come with ram extensions. Do not fit these, if they are fitted remove them and throw in bin! The fitting of rams with the extensions in place will increase the angle of bonnet too much, this will put strain on the bonnet or ram causing either a broken ram or bent bonnet. I was unaware that some packs shipped with these already fitted in place on the ram (they simply unscrew).

DO NOT FIT TO RAMS! GOT IT?

Latest update: This post certainly caused a stir in the world of Skyline's I must say. Here are the facts now the post has been in the wild for a few weeks.
These kits do work on R34 GTT's as well as 33's, the kits are unsuitable for GTR's, they do lift and hold steel bonnets on both 33's and 34's without a problem. People with bonnet raisers (the bonnets lifted at the rear style) can use the extensions as the increase in angle is cancelled by the spacers on the back of the bonnet (although I personally would still not recommend it).

It is fun to see the post take on it's own life in social media, although I have come across one wag attempting to profit from fitting these lifters, posting on Facebook,  they claimed they had come up with bonnet lifters. I assume the plan was to simply sell the kits on for a profit. The world is full of people, some good, some less so.

The mind bogglingly big lump of metal that it is the R33 Bonnet for the GTS range, is probably one of the most chopped about and changed items on the modifying scene. However it does not matter if you have a steel, carbon or FRP version without doubt the biggest pain in the posterior and easiest way of loosing 'cool' points, is the lifting of the bonnet and the rickety old bonnet stay.

There are kits available for the GTR (at hugely expensive prices) but nothing for the forgotten and often maligned GTS.

No, for our ownership we have the lovely bonnet stay that we erect like a tent pole every time we want to poke about in the engine bay. Numerous are the times I have personally wacked my head, bumped it or even watched it fall out in a gust of wind!

One of the things (among many) I could never understand is just why Nissan chose to manufacture this magnificent 'stick' out of their trade mark 'instant rust' material. Many are the cars with magnificent engine bays and manky old rusty or badly painted bonnet stays (which is why I had mine chromed.... but then I would....).

I think that ever since owning mine I have been looking to fit lifters (dampers). Maybe try a GTR one out... Although the fenders on a GTR are slightly different which messes up the brackets so it just wouldn't work.

Brackets... Brackets are the problem here. Figure that out and you are well on the way, trouble is I could never be focused enough to figure it out.

I did get there in the end though and armed with the basic idea, sizes and sketches was about to set out to find someone to fabricate the hinge brackets for me.

However at this point I changed direction and decided to see what the automotive world had to offer. Was there something bespoke that I could use out there?

As it turned out, there was!

I purchased a kit for (of all things) a Sus-Tec kit for a Honda Civic (eBay Link) at a cheap price of just £32 including post. 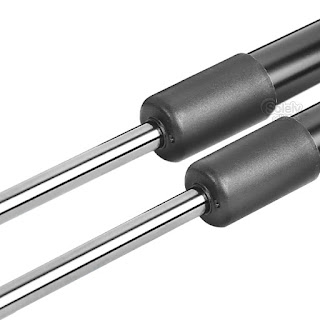 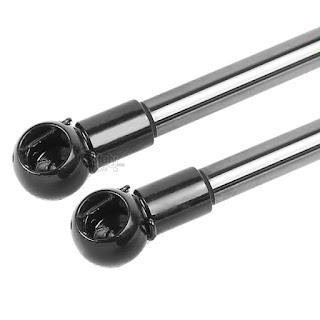 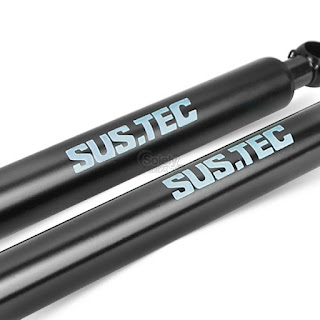 You will see from the second picture I decided that the plain struts with 'SUS-TEC' written on them just would not do. It would not be hard to remove the lettering and have them plain, substitute your own letters, paint or wrap them.

Although my bonnet is made from Hybrid carbon, these have also been tested on steel and work better than my own (which is probably a bit light).

The kit comes with two struts, two M6 threaded ball ends to fit in the wing and two brackets for the hinges. The balls are held in place with pins that push through and clip onto the ball holder.
Ideally I would like to have seen a bracket that could be secured by both the bolt holes, although this does work 'as is' perhaps some enterprising soul out there will latch onto this and knock something up.