A very popular 'modification' or addition to the engine bay, seems to be 'Engine dampers' the idea of this is, simply it will stop your engine 'moving' about under hard driving conditions and improve the life of your engine mounts.
Also but probably of less importance to the the average user, it also provides some dress up for the engine bay! 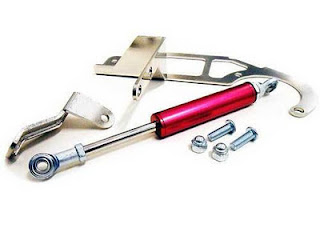 As you can see, the kit consists of a couple of brackets, a damper and a couple of screws. The brackets come in what looks like a nickel plate finish and whereby the finish is acceptable, it isn't of the first order. However they are quite passable. There are two brackets, the larger fits to the left hand suspension turret top (requiring your Strut brace to fit over the top of it) and also to the earthing points next to the fuse/relay box. The smaller of the brackets replaces the engine lift/hoist point.
Fitting of the engine bracket is a little fiddly as access isn't easy for bolt removal. This is increased when fitting the new bracket due to the rib that runs down it's center. However it can be done.

The damper has two rough cast ends (which you may want to clean up before fitting) and an anodized body. Usually supplied in red or blue, my example was not well anodised and it seemed slightly patchy on colour. I masked up, primed and painted mine in body colour before fitting.

The screws are zinc plated items.

When fitting (as mentioned) the screws can be a bit of a pain to do, in fact I found the harder ones were the ones located by the fuse box. It could also be said that if I had not been so lazy as to not move the fuse box out of the way beforehand, this would have been a simpler task!

The actual fitting of the item is good and it slots straight in. The unit comes shipped with no instructions or blurb.

Does it work?
Well 'they' say that fitting this to your car you will:
Reduce engine vibration, increasing horsepower to the flywheel as torque reaction is minimised.
Give a smoother, more linear power delivery through the transmission and to the rear wheels.

I say that the above statements are probably big claims, although I'm open to try them out!
Posted by Karl at 11:05