Yes I know with my sense of humour the word 'baffled' is too good to resist.. So that's it done out of the way...


As part of the forging process I thought I could do with a new sump. Some bright spark had jacked my car up on the original sump leaving a lovely dent in it. Amazing isn't it? Just goes to show just because you think you are a mechanic does not mean you have a peanut shell of sense around that tiny brain.
Anyway..
Because I am not too bright myself and have an irresistible urge to try something new, I started to look at baffled sumps.


This will limit how much the oil is able to slosh around and hopefully keep it where the pump can suck it up into the engine.  Simply put a baffled oil pan has chambers that make it easy for the oil to travel toward the oil pick up but difficult for it to get sloshed the other way. Also, they tend to increase the capacity of the oil pan so that more oil will be available in the whole system.
In this instance it will be probably an additional 3 liters.

There is one supplier that I know of in the UK although was not sure of quality. There is also a well known supplier in New Zealand called the Rotorua Import Pro Shop or R.I.P.S for short.
Well with a name as impressive as that it would have to be good and I am sure a lot of you out there in the tuning world will have heard the name. 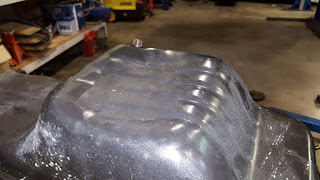 My original dented Sump (need I rant again?). The sump is not in theory the hardest thing to change... After all it is held on with bolts. The only really annoying thing is that the engine needs to come out to do it. 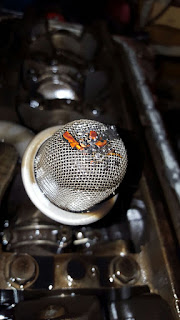 The oil pickup had a bit of debris, so was doing its job. The orange sealant type stuff remains a mystery though. 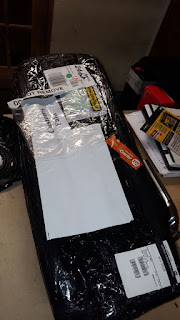 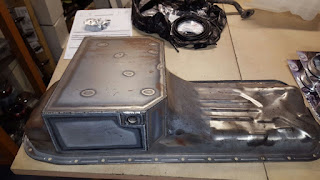 Now I think you will all agree that the paint finish is not all it could be, My first reaction was 'nice, but shouldn't it have some... you know... Paint?
The Sump is actually supplied in an unfinished state. 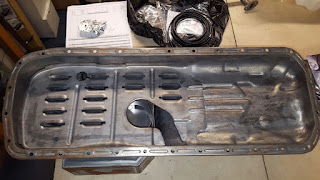 A view inside (for the terminally interested) you can see how the oil drains back through the Louvres.. (I am exhausted from spelling that). 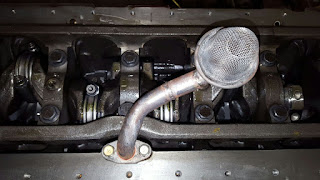 A new extended pick up is included 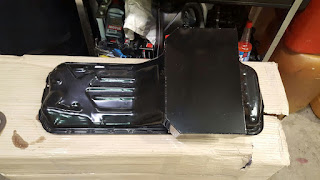 Back from powder coat 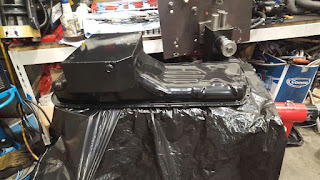 Not Jack proof...Although quite the work of art. Shame no one will see it much! 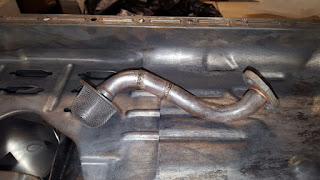 Ms Skyline always likes to drink from a straw, it makes her feel sophisticated and does not ruin her lipstick. So there it is, another part sourced and another problem solved. Thanks to MGT Motorsport for the photos and hard work so far.