Now this would ruin your day out!

From the driver. As posted on the GTROC forum. I have added some grammar, apologies if English is poor in some areas:

First (track) session breather pipe split by the turbo, changed the pipe but didn't have the time to clean all the oil off before next session

Second session, 2nd lap, slowed down and came in due to smoke in the foot well .
As it had started getting worse I stopped just by the ambulance and fire area at which point the aircon radiator exploded giving me a nose bleed. I got out walked round the front, went to walk back to get extinguisher behind my seat but was shouted at and pushed by the marshals to get back.

I was pretty dazed and shocked so I just had to stand back while it burned, as the fire truck guy was directing traffic to the pit lane

Totally my fault, next time to clean off the oil and waste a £35 session then loose the car... hopefully i'll bounce back stripped most of it last night interior is fine loom is done!! the main man mr Julian smith rang me this morning offering 1 can of Rio and 1 r34 gtr engine wiring loom 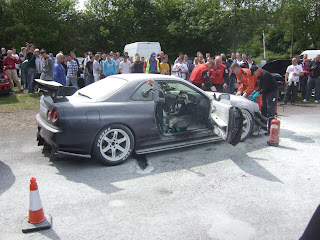 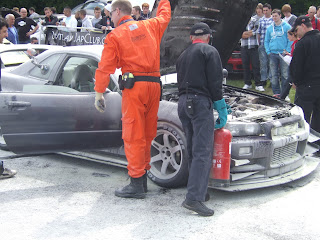 Disaster! After the usual messing about with the catalytic converter for the MOT to keep the car legal on the roads in the UK swapping it out for with the de cat pipe. The exhaust moved a bit, enough to be just pressing up against the rear bumper causing some 'light melting' damage.

Not that anyone would ever notice I thought it would be an opportunity to have a play with a carbon heat shield.
I sourced the heat shield from EP Racing and it retails at a whopping £60. Although carbon parts are usually quite expensive. The irony being that personally I can't stand the sight of carbon and think it looks a bit cheap! The component itself was well made, if a little deformed.
Fitting was reasonably straight forward, in fact I made this part of the process hard for myself as even though I knew it was deformed, I assumed (wrongly) that the sticky pads I had acquired would 'pull' it into shape.

I prepared the part by roughing up the lacquer finish slightly and using a thick filler primer to fill any pin holes. I then sprayed a coat or two of Nissan Kuro Black.

So I had the heat shield stuck firmly on the car and half hanging off at the same time! So after wrenching it free and picking off the sticky tape, I applied new tape and this time took a hair dryer to it, heating the carbon fibre up. I then pressed it into the rear bumper and it conformed to the curves like a dream! It would probably have been a much better idea to have done this before painting, but we live and learn!
﻿ ﻿After some flatting back and polishing up the end result, although not spectacular. looks reasonably subtle and actually quite good. Hope you all agree dear readers!
Posted by Karl at 21:41 1 comment:

Collected the car on May 3rd, which amongst other things was also my birthday! Although I suspect most would be less interested in that and more interested in the Dyno results of the tuning. 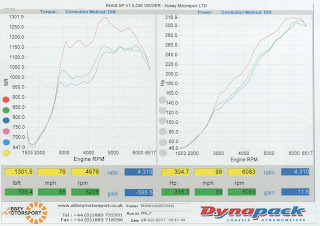 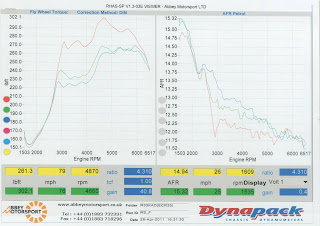 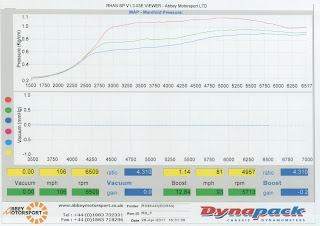 As you will see, these are hub figures so the read out is given at the wheels rather than the flywheel. For information (and bragging rights?) the conversion from the hubs to the flywheel is around 360 BHP.
Posted by Karl at 09:04 No comments: