Is social media the new, new coming of age?

Hi everyone, it's been a while since I last shared my infinite pearls of wisdom as I (sometimes foolishly) pick apart my Skyline into a bazzilion unrecognisable bits and then in a rather haphazard way suggest that you all have a go at it on here.
This is in part to do with the fact that there is not an awful lot left of the car for me to improve (vandalise) on. It is pretty much where it needs to be (even if it is having some work right now, that is the end of it I swear!).
I have actually been quite busy with Facebook... Now you may say that social media is the Devils work, that you don't want to be looked at or look at endless pictures of someones dinner, child, right or left wing ideals and even helping to rig US elections. But there is another side to it and three years ago four chaps started a group page the Skyline Owners Forum, with the vague idea that a few people in the UK may enjoy an independent, non sponsored place to post their thoughts. Well it kind of took off and is now hitting at 23k members and has a team of enthusiasts looking after it.

Lets face it anyone with half a clue can start a Facebook group for whatever they like and quickly build a community of like minded people. Although it is something else again to start a group, keep it active and topical. Just by searching the Skyline name you will find dozens.

Now I am sure that you are all saying this is very commendable, well done and all that (if you have not switched to something much more entertaining by now).

Groups for Facebook may have started sometime ago. But before smartphones were in everyone's hot little hands and back at that time if you had a passing interest in a Skyline, you would probably have to join one of the forums on the internet. These were strange places where it wasn't always easy to post, especially pictures and other regular users seemed to be in some little private club all of their own. These cliques never to be penetrated by the average man on the street. It never suited forums to have a proper Facebook presence and comments were often discouraged or deleted.

Every old style forum has its politics, what is allowed, what isn't. The local troll, the local keyboard warrior, that one new user who keeps asking seemingly stupid questions. There will also be a group who feel over moderated.
With Facebook, Groups are run by 'benevolent dictatorships' It isn't always fair but it can just about work. It is almost the wild west of the old style forum in some regards. Alas there is not a 'one fit' solution to groups and there are difficulties in running one. Negatives include (apart from the human condition) limited posting ability (no book writing) and searching out topical items, not to mention Facebook themselves constantly changing how things work!

It was by chance that I became an Admin early on in proceedings. I thought (quite wrongly) that everyone would be mad for car shows and meets. If I knew the truth of organising these things I would never have done it! There have been many 'bad' times with disgruntled users wanting to do physically impossible things and people who want to humiliate in public. However it can also be amazingly good fun with friendships made indulging in a hobby/way of life! In 2019 at Japfest Silverstone the Skyline Owners Forum won Best Club Stand. Possibly more significant as a breakthrough from the old style forums and showing that things have now pretty much come full circle.
Where things are going in the future I don't know. A lot of old style forums have already given up either making the transition or just dying a death. There is a new updated platform version of V-Bulletin coming, which old school Administrators/owners are excited about. However it may be a case of too little, too late? Lets face it, even blogging is a dead art now (who wants to read stuff?!?). The advent of Drive Tribe was trumpeted from the rooftops and immediately dropped down deader than flared trousers. Looking at the socials we like fast consumption of 'things', people want to be Instagram hero's or tweeting maniacs and have people who love and adore their photos or 'blip' vert comments.

I dunno about any thing.
This isn't true...
I know what I like, basically keep doing what you like. If it makes you unhappy, stop doing it.

Having changed the Garrett GTX3076r core on the turbo it comes complete with a new front housing. The general finish is shot blast rough matt. 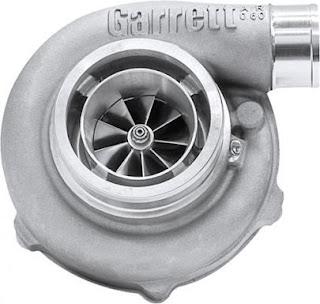 I have to confess that this would be more of a vanity project than one of urgent necessity! The photos are taken for my reference, as I have found (often to my cost) that weeks later when you come back to bolting things up, the distant memory does not serve well!
I used to work in the casting industry and a fine blast finish is great, it hides a multitude of sins and casting marks, but it is also a magnet for dirt and crud that is impossible to remove (let alone dirty finger prints!).

So I had a word with Johnathan @ Basingstoke Metal Finishers to take a look. Polishing is something I have done before, but for a true quality finish it is always best to speak to the pro's.

So will be back next week sometime to show how it turned out! The fun will be in trying to bolt the thing back on I suspect!
Posted by Karl at 09:29 No comments: 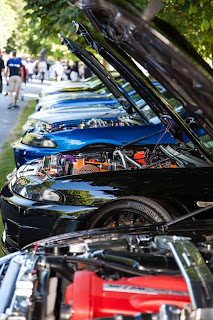