I don't know what it so about wing emblems, but the standard red and white badges just don't do it for me. They stick out like a sore thumb and after a while the thin coat of enamel starts to wear away around the edges, making them a feature I could quite happily live without.
Saying that, having some sort of defining badge is okay and unusual. I used to have the R32 gold option emblems on mine befoe swapping them for a tidy 'quick fix' set of newer ones with a lick of gold paint.
However now I am going to run a new set of alloy wheels in matt black, the time has come to think again.
At first I planned just to slap some Matt black over a set of R32 badges, stick them on and have done with it. However this would have been too easy, so in the spirit of making things as difficult as possible, an investigation into hydrograpic dipping was required.
Hydrograpic dipping or wet transfer dipping is a simple process of laying a print into water, spraying the back liberally with some agent, dipping the component through the transfer and then finishing with clear coat.
Google hydrograpic printing for the process to try it yourself, all the components are readily available at small cost.
I decided to try a carbon finish on the wing badges/emblems and although not quite perfection, they are reasonably close. Judge for yourselves. 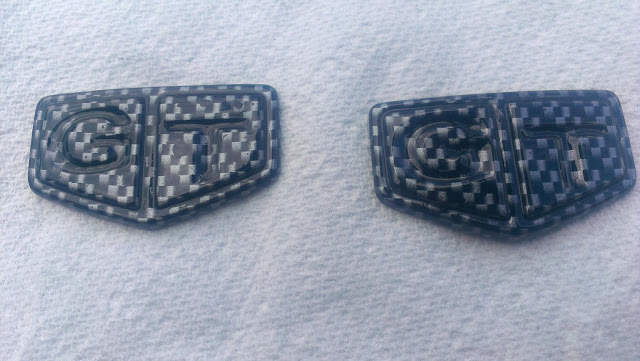 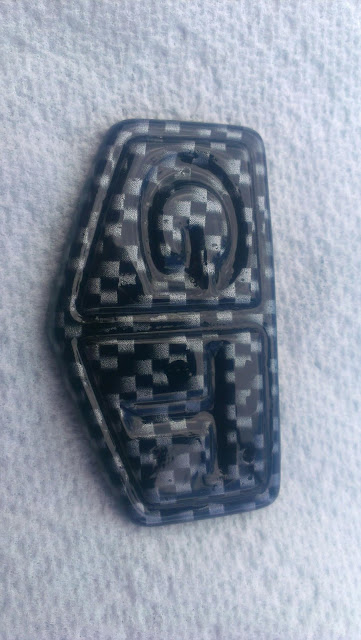 I spotted a post on the Skyline Owners Forum for a GT-R spoiler for sale. Oh my... Can it be? Yes it is, genuine NISMO end caps for the GT-R spoiler!

Way back when I first got hold of my GT-R spoiler it came with GT-R end caps, (which I peeled off and sold to help fund the spoiler). At that time I wanted to change to a set of NISMO branded ones but they had been out of production for ages at that point. After much searching I had to settle for an unbranded Carbon Fibre end cap. This was okay (I suppose) although it was not as good a cover as the plastic GT-R one that it replaced (Chinese junk (and I don't mean a boat)).

So back to the forum... The deal was done and another spoiler was acquired at a bargain basement price.

A quick assault with a hair dryer soon loosened my prize bits of carbon and they easily came away. I then cleaned the backs with some sticky remover and replaced with double sided tape from eBay.. Talk about strong tape, this stuff could hold up shelves! The end caps were sprayed black, dried and covers glued firmly into place.

Now all I have to decide is if I should keep the GT-R spoiler as a spare or sell it on for a quick profit! 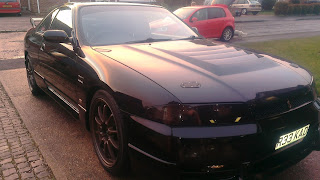 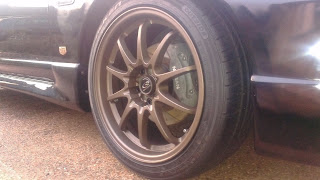 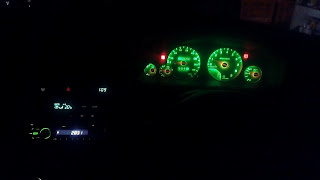