Listen to the Law

Well I took my flare home and mounted it in pride of place, it actually took me longer to take a photo than it did to mount. Interestingly flares are not actually legal in the UK and although I can't claim to be expert on the law (I'm not a barrack room lawyer). It turns out that as they are an 'explosive' type device they fall under legislation, admittedly fuzzy legislation and not exactly specific as far as I can tell. It does appear that for the the Single Vehicle Approval scheme (SVA test for importing cars) most people have the flares removed and then quite simply pop them back in after the test.

As mine isn't for use as it were, I am happy just to have the cover itself in place, removing the offending 'explosive component' and stay on the right side of the law.
It's interesting my touching on the subject of law though, as whilst channel hopping I tuned into one of those 'cheap' reality (as in the sense they cost nothing to make) TV shows here the other day, where you have a 'D' list reporter tagging along with the long arm of the law. The basic idea of the show is to highlight bad drivers doing such naughty things as speeding, driving without insurance or having defective tires, lights, etc. You get it.
The show was dedicated to modified cars and naturally they focused on the Japanese scene, getting stuck into such horrors as small number plates and horror of horrors, loud exhausts! Whilst being relatively fair comment on the actual 'law' it was pretty unbalanced when looking at group meets, going from a static group of car owners to what was obviously a different piece of filming, showing more 'enthusiastic' driving. The film then flicked over to a group of younger drivers in small cars like Fiesta's and Focuses. Having a group meet and generally doing what 'young folk' of a certain age do. The presenter was actually outraged that one of them should 'moon' (bare his bottom) to the camera. The vibe of the piece was poor and presented to Mr and Mrs Joe Public as an underground culture almost akin to drug taking! I'm sure that elements of bad behaviour do exist (I have seen them) but then they exist everywhere, in business, in sports etc. Even I may have broken the speed limit on occasion. However TV programmes like this are unhelpful as all they do is create barriers, drive the culture underground and attract people to whom the rebel image is appealing.
Posted by Karl at 09:13 No comments:

I have a flare for this car building!

Okay, bad jokes aside... At last! A flare!! Now I have something to put into my holder in the car. Been waiting ages to get hold of an original one of these. They are more difficult to buy here as it is an 'explosive, combustable' device. So that means places like eBay would pull the listing and that putting it in the post is a bit of a 'no, no'. However why let that stop me, live dangerous eh?

Can't wait to get it into it's bracket! Yet another piece of the puzzle finished.

Annoyed with the amount of dust that settles on the car, something had to be done. I don't know where all the dust comes from where I park it but after a week, the car is literally covered in a fine coating of dust and dead spiders etc.
So I decided rather than use my bedding I would invest a few English Pounds in a car cover.
I obtained the car cover from Hamilton Classic Ltd  Here is their sales blurb.

As per usual I find that I have not been quite keeping up with events on the car, sometimes weeks can pass without anything spectacular happening and then it will seemingly all happen at once!
Recently I had my bonnet resprayed black, after a rather annoying stone chip incident was made exponentially worse by yours truly attempting an 'invisible repair'. The resulting spray work was of a high quality, although didn't quite match up to my own personal super high standards, in the respect that it appeared a very different shade of black in certain light conditions. To me this was pretty much unacceptable and although I did listen to those that said "it doesn't notice", I could see it. In fact I went along to a local Japanese car meet, parking under the artificial street lighting and it was awful! So, something had to be done.
What though? Respray again? respray more and blend it in? Respray the whole car??? Eeek! Reality check!
How about loosing the bonnet altogether and going with carbon then. At least this is 'supposed' to be a different colour, would lose a lot of weight at the same time and possibly be kind of cool.
I have already flirted with carbon a reasonable amount from the carbon blade and end caps to the stick on Nismo B pillars. So felt that a huge expanse of bonnet would not be too out of place, besides if it offended me that much I could always paint it.. Although this would be straight back to square one.
At first I wanted to get hold of a standard 'aero' bonnet, unsurprisingly these are not so many of these available out there for the R33 GTS-25t and the ones that were seemed 'questionable' as to how real they were in the carbon sense. To me a sheet of carbon fibre laid over a fibreglass shell is not a carbon bonnet!
Naturally I looked at Seibon bonnets and knew I couldn't go wrong with these (probably) but then I also took a look at Knight Racers selection.
I quite liked the look of the Nismo style bonnet, as it retained most of the features of the original and just added to them with vents in the central section. Naturally I was not all that keen on these being permanently open to the elements although the bonnet also comes with a cover that fits neatly into place to keep the rain out (although we currently have a drought in the UK its still a wet place to live!).
So in the end I went for a Hybrid Carbon Bonnet, Nismo style from Knight Racer. I could give the low down of it all on the blog, although probably this would be better coming from Knight Racer themselves. Check out their Hybrid Carbon Page here
What I can comment on is fitment. I decided that I had to go with Aerocatches, no getting away from this for safety reasons. I have heard that the bonnet is pretty robust and will probably stay in place at very high speed, although Aerocatches are recommended. Well the words 'probably and recommended' kind of mean 'must have' in my book.
I have to also say that the thought of cutting holes in the (somewhat expensive) bonnet did not fill me with joy, nor the thought of drilling and fitting the posts for the Aerocatches in the slam panel. This was another job for knight racer and looking at the amount of effort involved in the end. I was more than happy to spend a little extra getting the fitting done. The fit itself is pretty good and the bonnet sits in line with both front wings. The only thing missing are the rubber seals around the lights etc. that stops the dust getting in. 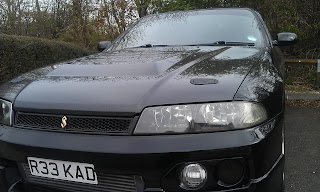 Living with the bonnet is reasonably easy, it does not rattle etc. and am sure if I were to remove the cover it would dissipate a lot of heat . Unlike the metal bonnet this one does not get red hot to the touch in certain places after a run either. A weird feature is being able to see Sunlight through the weave when the bonnet is open!
A downside is that water can pool in the vents when the cover is on. This wouldn't be a problem when moving although could possibly be a drag in a good downpour of rain. Also when cleaning the car it's a good idea to put a cloth over the engine bay and open up the bonnet to 'drain it' after a wash. 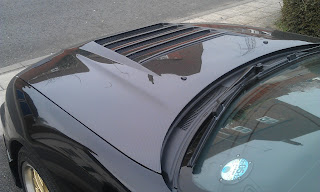 So really this is the final? piece of the jigsaw for Ms Skyline. All the bits are done (and a few more). Everything is in place. I can stop molesting her now!
So what would you do with something that you spent all your time, sweat, blood and tears on? Ah a photo shoot. Here is a teaser picture of Ms Skylines glamour shooting session. More to come in the next posts. ﻿
Posted by Karl at 13:38 3 comments: