Yaay the gearbox is "crunchy" in fourth.. It will be okay, it is nothing, just my driving style... Had been telling myself this since last summer and had adapted quite well to trying to slip the car into fourth gear. I mean, I had brought a reconditioned box when changing from Auto to Manual and never really ragged it hard. Turns out that the reconditioned box was probably never much good really, I can't even put this down to experience as thought I was doing the right thing at the time!

Anyway hindsight would be a wonderful thing.. and other cliches.

So the search was on for a good reliable gearbox. Initially Google being my friend I searched against the possibility of fitting a Z33 350Z box or similar, something like a Supra box. It soon became apparent that this is not a popular mod due to cost and difficulties in doing it. Even getting a competent garage involved would still have a learning curve attached and be costly. I just didn't need that aggravation in my life. Budget was also a pressing consideration, especially now I had completely blown it on the engine rebuild. So with this in mind I acquired a replacement 33 box reconditioned with R34 GTT Neo Internals, the idea being that the synchros are a lot bigger than that of a standard R33 thus making it a stronger box.

Before you all rush out and buy R34 gearboxes don't forget that the GTT uses a pull type clutch and the R33 uses a push, so you can't just bolt a 34 gear box and be done with it. so unless you want to replace the clutch or replace the bell housing or find a way to rearrange the slave cylinder and fork. then it wont work. 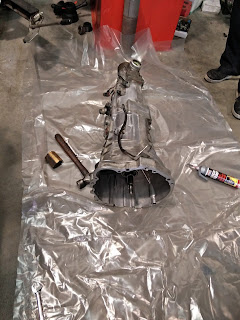 As fond as I am of crawling around with the gearbox pressed against my nose, this for me was a job for the professionals and I booked the car into MGT Motorsport. Is amazing how quickly they set about the job and it felt like no time before the new box was being man handled into place. There was a slight hold up with the bolt holes for the starter motor as the backplate having come from an auto was a pain to line up. In the end the holes were elongated and the problem went away.
The oil drain plug from the old gearbox was very spiky with metal particles attached to the magnet and the oil itself was nasty with metal wear. So if anything it was at that point that I was happy I decided to change boxes.
For the new oily stuff, I had thought to use Redline MT 90 although after chatting to the guys decided to change over to Redline heavy shock proof. This has a viscosity of 75W250 but a fluid friction like 75W90, initial thoughts are positive on it, although it does take a while to warm up.

So it's early days, although can say that the old gearbox was a bit pants, maybe always was a bit rubbish actually and the new one has already changed my driving experience.

I also have a new feature in my back garden in the shape of the old gearbox (just in case I need a rebuild).