It is of course ironic that you throw yourself into modifying the car, increasing the power, making it look 'pretty' (depends on taste!) and completely ignore actually stopping the thing!

I have known for a while that my brakes are okay, not great, they stop the car.. but could be better, so I looked at various options and considered a 'big brake kit'. The only difficulty with these is parts, I'm not interested in mucking about when it comes to changing pads and having a limited supplier base in the UK. Only to find out that although available they cost the price of Greece's deficit to buy them.

So I looked for something slightly closer to home, asked around and decided to go for Brembo's which are identical to what's fitted on the R34 GTR and 350Z (in size, fitments differ).

A picture paints a thousand words.

These were sourced from Godspeed brakes who I must say are incredibly helpful and probably when dealing with folk like me, patient!

All that needs to be done now is the small task of fitting the front and rear discs, calipers, pipes etc. Valiantly I am not going to be doing this and am reverting to the (what I consider) best Skyline garage in the UK Serious Performance Autos (07501 706023). I just hope I have not forgotten anything when it comes to parts!
Posted by Karl at 12:04 No comments:

After much attacking with a Dremel hand cutter, I managed to get my plate surround into a condition good enough to fit!
A facinating fact I had not given much thought to is that in the US many States do not require front plates (although this may have changed now). Additionally the recess for the plate on the Skyline is practically a perfect fit. Quite ironic as I will not be using it, preferring instead to mount the plate slightly above it, thereby enabling more airflow.
Generally I'm pleased with the results in the two main vital areas. The first being, it looks good and the second? It was cheap!
Looking on line, the only purpose made carbon surround actually weighed in at a whopping 70 UK pounds. I think in Europe this should be called a real carbon tax!
Please excuse the poor quality of pictures! 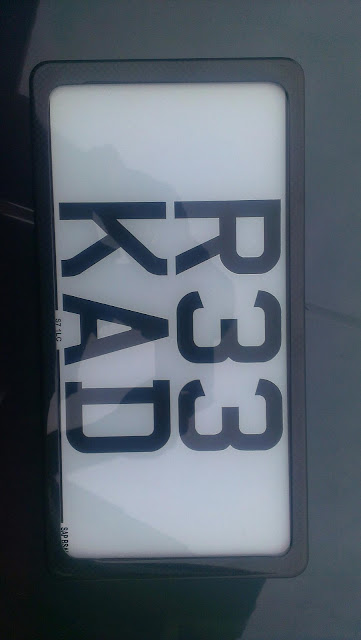 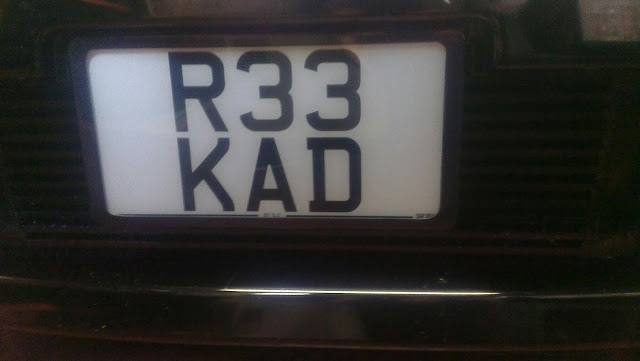 Spring is here and time for a bunny look


Think I became bored waiting for the good weather to finally arrive here in the UK. So there have been many and various mods taking place. Some little, some less so, especially in the financial sense.

One thing that I have always felt mildly uncomfortable with is my number plate. Generally drivers of Japanese cars in the UK try to get away with front plates as small as legally possible and in many cases totally illegal. Even for those with a small but legal plate can run into difficulties, as this depends on the local law enforcement actually knowing what the legislation is. I used to get around this by always carrying the department of transports paperwork concerning imported cars, sizing and spacing of letters and plate size.

The main difficulty I had, was that the number plate recess in the GTS 25t is just too small for a rectangular plate with six characters. If I had dug deeper in my pocket when registering the car and gone for five characters it would not have been such an issue. This meant that 'technically' my plate was 2mm 'short' in its overall width, making the car 'a probable' for being found at fault and suitable to causing me a pain in my pocket!

Just stick an import plate on then, although this will significantly reduce airflow to the intercooler. When I thought about it though and with what I already know about the rules for plates. There is no reason why I needed to fit a larger Japanese import plate when a smaller American import plate would do.

Full information about UK plates can be found here

So opting for the smallest two line plate I can, there is still the option of cutting it down at the sides making it even smaller. There is also the option of making the plate a feature with a 'surround' sourced for the American market.

Naturally this would not be a direct fit (that would be too easy) and the surround will require some modification notably in opening up the aperture to suit a double lined UK plate.

Will see how this goes!