Replacement Gaiters or "go on, feel my leather"

Positively a long time ago my car started out life as a Automatic, this was slow and not the mid life crisis cure that I was looking for at all. The auto box consigned to the bin and a reassuringly expensive reconditioned box bolted in its place. I would not say that the change went well as am on my second gearbox and third clutch now. However with an Xtreme Twin Plate and box with R34 internals from Garage D at least I am at that happy place (for now).

The only trouble with changing from auto to manual is that the interior plastics are second hand. Well this is fine if they are like new (which Spec 2's usually are). The Spec ones and GTRs of a certain age, usually come with a rubber coating which is horrible to the touch and usually scratched, so no wonder they changed it.

Its the gaiters that presented me with my most recent wish to change... Improve upon.
A while back I sent of my Momo option wheel to have it recovered by Royal Steering Wheels in Smooth leather, Blue 1318 & Grey 415 stitching. This was great, in fact better than I could have hoped. The only thing? Well didn't match the other leather did it!

So went back to Royal Steering Wheels and got them to make the rest and cover my Nismo shift whilst they were at it.

Obviously I never thought it through really, as obviously the hand brake handle is still black. But what the hell I can learn to live with the most minor of things... I hope!

This is of course the most expensive way that you can change these items and you have to send a pattern of the part so they can wreck it for making the new ones! Compare this to buying a leather gaiter set on eBay will set you back anywhere from £7 to £10 (not much) whereas this way? £50.. BANG! But it is just another little detail which makes me all warm and fuzzy inside. 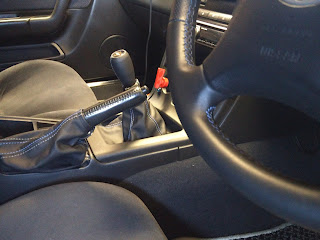 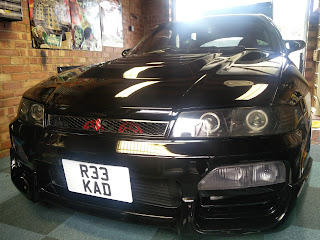