Sometimes in an effort to understand things it helps me to write them down. Which kind of sums up the whole of the blog and a general lack of my listening to people! For instance there are things I will never understand, such as why is it that so many UK Nissan GTR drivers are such porky pigs?

One thing that I was keen to do but didn't really know why, was to get the cylinder head ported and flowed. I mean how can porting make such a difference to output?

Cylinder head porting refers to the process of modifying the intake and exhaust ports on the engine to improve the quality and quantity of air flow. As manufactured heads would not have the attention to detail that porting offers due to manufacturing constraints. Porting gives that attention and brings the engine to much higher levels of efficiency. The porting process is greatly responsible for the high power output.

Imagine the air around us, we breath it but do we feel it "as light as air" which is to say it has no substance as we move slowly through it. However engines operating at high speed need to force and suck air, pulling it in and spitting it out again, so in this instance, air becomes unwieldy, sticky and heavy.

Pumping air at high speed is a major problem and bottle neck, so head porting helps to eradicate this.

My head was CNC machined on behalf of MGT Motorsport (or on facebook) at Ric Wood Motorsport who specialise in design, development and build of race winning engines and components.

All of the pictures below are 'after' shots. When enlarged the quality shines out. 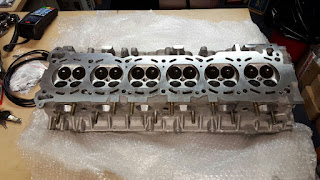 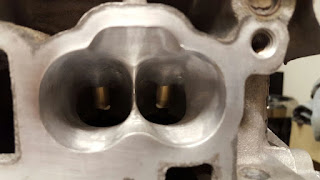 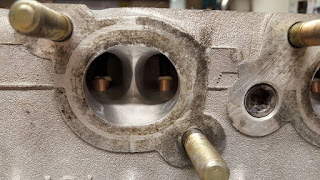 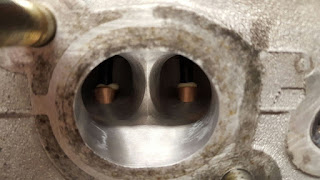 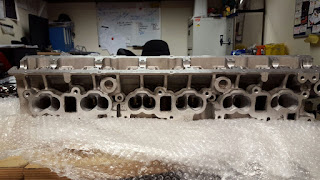 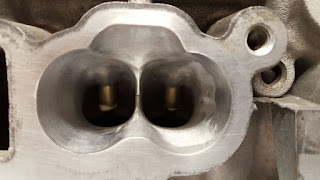 A small video of a cylinder head in action.

The whole process was proving to be the Achilles heel of the project at one point. MGT's usual machine shop being too busy and wanting a long lead time. Fortunately Ric Wood Motorsport stepped in and saved the day, although also rather unfortunately at a cost to the budget.

Ideally I should have purchased a second hand head last Summer and just sent it up to MGT but getting work done wouldn't be the same without a healthy dose of stress.
Posted by Karl at 13:33