Now it's not often you get a group of Japan's finest all getting together in a school play ground but when the owners club made this special plea, there were too many owners willing to join in.

'we have had a plea from a special needs school in stevenage, herts for some of our members to attend their school for one of their pupils, an 18 year old lad who is Skyline mad but has had a very troubled and difficult year and the school would like to do something special for him.'

Even though it was a work day twelve Skyline's of all shapes and sizes. From all over the UK descended on Stevenage. 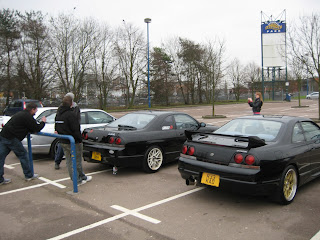 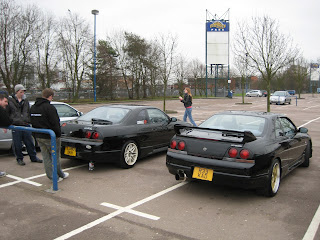 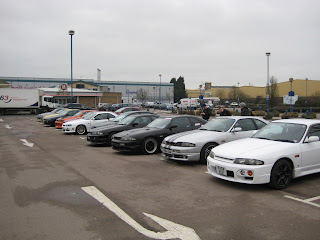 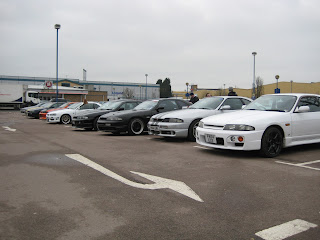 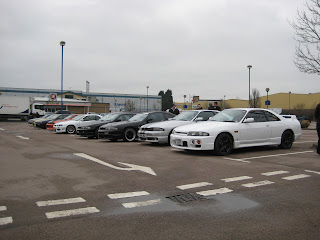 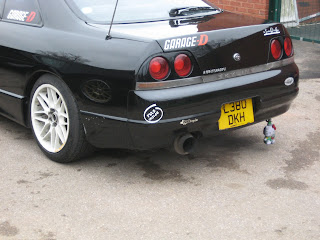 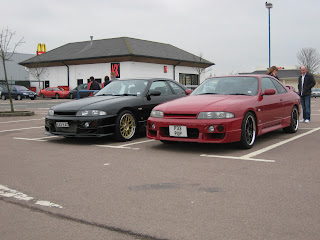 As you can see from the pictures, the turn out and quality of these cars was great. What is particularly impressive is that some of them are pushing on fifteen/sixteen years old now and look as fresh as they had just come off the production line.

The man we were all there to see was Nick, who I think will be smiling for weeks on this. All of the younger kids made a beeline for Ms Skyline and had great fun sitting in her honking the horn and pressing... well everything! Nick was torn between the owners group 'star' and Ms Skyline for who to have a ride in. To my relief, he chose the bright orange heavily body kitted star of the owners group... Probably a good thing as I am in no way responsible enough to take out young adults and would have 'hooned' it around. Probably smoking the tires and doing all things that kids love!

Nick had drawn a rather lovely picture of a Skyline, which he presented to the owners group. It had a big scull and crossbones on the bonnet. I asked Nick if maybe we should paint one on mine to which he was greatly enthusiastic! Visit here for the owners group posts of the day.

We were treated to a tour of the school and met many pupils. It was a real eye opener into another world for me to see. It does bring home the stupidity of my one track putting the car before everything else, don't worry though dear reader, my memory is short and there is a stainless steel power steering reservoir cover that is urgently needed!
Special thanks' should goto the school itself for putting up with us and giving us such a warm welcome.
Posted by Karl at 20:25